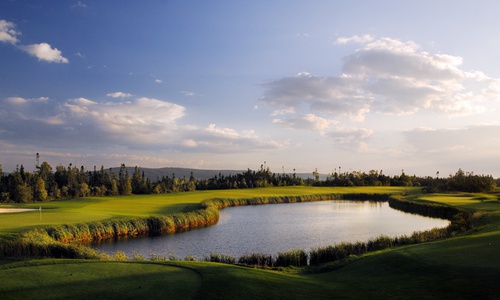 Like the waves crashing against the shoreline at Cape Breton’s recently launched Cabot Links, golf’s hot spots come one upon the next.

In their turn, the courses of Whistler, Prince Edward Island, Muskoka, Niagara, the Laurentians, the Alberta Rockies and more recently the Okanagan Valley have all been the toast of Canadian golf.

Now, for the second time in recent memory, tiny Cape Breton, Nova Scotia, has muscled all challengers aside.

Back in the 1990s, golfers marvelled at the one-two knockout punch of newcomer Bell Bay Golf Club in the tourist town of Baddeck, and the newly restored Highlands Links in Cape Breton National Park, two world-class courses situated less than an hour’s drive apart on the famedCabot Trail. Designed by Tom McBroom, Bell Bay was voted Canada’s best new course of 1998 by Golf Digest. And following a $4-million facelift by Graham Cooke, Highlands Links, a Stanley Thompson gem opened in 1941, was ranked the world’s 57th best course by Golf Magazine in 1999, the highest rating given any Canadian layout.

But waves crash or move on, and Cape Breton soon became just one of several destinations vying for the attention of golf tourists.

Though I visited the property last year (see our feature story Canada’s First True Links Opens in Cape Breton), I didn’t have the opportunity to play it until recently. What I found, to my delight, was a pure Scottish-style links; a Rod Whitman design so good that already golfers are eagerly flying in from around the world to play it.

But Cape Breton’s golf riches don’t end there. Under the artful direction of Ian Andrew, a rising star among Canadian architects, Highlands Links has lovingly been given a second makeover. Seemingly channeling the spirit and genius of Thompson himself, Andrew has done an impeccable job of restoring the greens and bunkers to the master’s original specifications. The old course hasn’t looked this good — or so true to Thompson’s vision — since shortly after its opening in 1941.

Having grabbed the spotlight once again, Cape Breton is likely to hold onto it for years to come.