April 17, 2013 Creating something from nothing at Ambassador 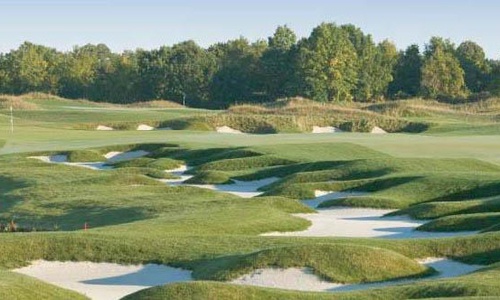 Sometimes golf course architects get to work on exceptional properties like rugged Muskoka landscapes or stunning Rocky Mountain sites. Their course designs are lauded as much for the beautiful natural scenery as for the course itself. Those are the courses that often win awards.

But the truth is that nature plays a large part in the perception of golfers and rankers, so that a mountain course will always have an advantage over a flat course; a forested site is preferable to an open field; and naturally occurring water beats the artificial kind every time. The preferred sites usually cost more to build as rock has to be blasted, trees cut, wetlands must be protected and so on. The accompanying green fee is testament to the effort and cost of construction.


When a course designer is faced with a totally flat piece of land, devoid of trees and seemingly without any soul at all, that’s when the inspiration must come from within. Such was the challenge facing Thomas McBroom when he first surveyed the former industrial property in Windsor destined to be the site of the Ambassador Golf Club. Boring was all he could think.

Yet a few years later in 2005, a golf course opened on the site to very positive reviews. McBroom has created an inspiring test of golf at Ambassador and the course is now regarded as one of the best in Southwestern Ontario.

To add some zing to the featureless property and create definition, McBroom employed a very aggressive bunkering style at Ambassador. Most par 4’s and 5’s utilize a series of fairway bunkers which serve as aiming points to define turns or as obstacles that must be played over enroute to the green.

The fairways themselves are generous but large fescue covered mounds define the edges and challenge golfers to play away. The fairways are canted either right or left off the mounding so that drives must be hit to allow for the ball to run off the slope usually towards more fescue in the opposite rough.

The greens at Ambassador are slightly raised, quite large and present a fair amount of slope and undulation. The approaches are generally open and allow for either a pitch or a bump and run type shot but the adjacent sides of the greens are covered in thick rough or have deep bunkers flashed into the face of the slopes. Miss a green and you will be faced with a challenging shot.

One of the more intriguing aspects of Ambassador is the presence of a number of ponds that McBroom enlarged from the former sand and gravel operation on the site. Water comes into play on both #3 and #4 in a way that forces players to take a longer route to the green or risk a penalty by being more aggressive. On #7, a medium length par 5, the green is tucked behind a long pond that adjoins the left side of the fairway from the 150-yard marker. The conservative play is to take three shots to the green using the right side of the fairway but players can go for the green in two if they can carry the pond. McBroom has sloped the green in such a way that it is receptive to a long second shot, just inviting disaster.

A very large pond on the back nine comes into play on three of the best holes at Ambassador. #13 is a long par 5 with water all down the left side that wraps around the back of the putting surface. The right side of this hole is lined with bunkers and fescue. A slight left turn approaching the green forces players to challenge the water especially if the pin is tucked in the back.

The next hole is a 211 yard par three over the same pond. The green is sloped front to back to be receptive but behind the green is a very high fescue covered ridge. Any tee shot that carries past the green will require a blast from the deep grass, downhill towards the water. If the pin is placed on the left side of this severely sloped green it means either an even longer carry over the water from the tee or a treacherous putt across the green if you decide to bail out to the right.

The final hole of this trilogy, #15, is the most interesting – a drivable par 4. The yardage says 321 off the back deck but the rangefinder indicates it’s only 275 in a straight line to the pin. The hole turns slightly right to left. Water skirts the hole the entire length on the left side and a line of deep bunkers runs the length of the fairway adjacent to the water. The bunkers present golfers with a visual challenge. Since the fairway is slightly higher than the tee, the landing area is partially obscured. Bunkers on the opposite side can be seen but that just serves to make the fairway seem impossibly narrow. So the decision is, do you hit a hybrid to the narrow fairway and risk bunkers both short and long or do you let the big dog eat and go for the green bringing the water into play? As it turns out, there is lots more room in the fairway than it appears off the tee but McBroom must chuckle when he thinks about the visual trick he plays on this hole.

Overall, Ambassador is a very good golf course. The routing is solid and the course isn’t tricked up in any way. It’s easily walkable and can be enjoyed by all skill levels as each hole offers an aggressive line over trouble and an alternate line that doesn’t require forced carries over sand or water.

I played the course in mid August and it was soft, with very lush fairways, extremely receptive greens and thick deep rough. I’m not sure it was intended to play that way as it’s more suited to the hard and fast style of a links type course. However, the hot humid weather and plenty of local rainfall are hard to overcome so you take what nature gives you.

There’s not a whole lot going on in Windsor these days but the casino is close by and there are a few good spots to eat. We were advised to try the ribs at the Tunnel BBQ which is right at the entrance to the Windsor - Detroit tunnel on the Canadian side. We did and they were excellent.

Ambassador is only minutes from downtown and the casino. Rates are $53 walking or $70 with cart. www.ambassadorgolfclub.com