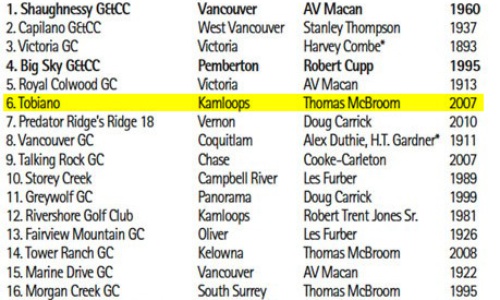 The PGA of BC recently conducted their first annual rankings for golf courses across the province and there were definitely some surprises...

When you think about who is best positioned to identify a province’s best courses, it’s hard to  argue with the selections of the PGA Professionals.  After all, they play the game, they teach the game and they play the courses. In short, they know the game.

Says Association Executive Director Donald Miyazaki, "With PGA members being both competitive players on, and instructors at, all of the top courses across BC, it was a natural fit to poll our membership to find their selections.”
“Overall almost 100 courses received multiple votes and that just goes to show the depth of the quality of the province's courses. Congratulations must go to the deserving facilities who made the three lists. We are sure that these selections will elicit a fair amount of dialogue."
Association members were polled both online and via telephone to make their choices for the top three facilities in the province, the top course in their region and a hidden gem anywhere in the province.
Over a six week polling period, more than one-third of the association's 650+ members responded. From these results using weighted rankings, three groups of deserving facilities were identified:
- BC's Top Twenty Courses
- BC's Top Regional Facilities (the top ranked public-access courses from each of five regions across the province)
- BC's Top Ten Hidden Gems
In all fifty of the most noteworthy facilities across BC are included on these three lists.
The ranking is a partnership between the PGA of BC and Inside Golf Magazine. Inside Golf Inc. (publishers of Inside Golf Magazine, Canadian Golf Traveller and www.insidegolf.ca) managed the survey and contacted all facilities across the province and then tabulated the results.
Says Inside Golf Publisher Jeff Sutherland, "It became clear as we received responses that two clear favourites were emerging and that Shaughnessy and Capilano would battle right down to the final few votes for #1.  Eventually Shaughnessy would take top honours by the smallest of margins. On the public-acess side, Big Sky has always had a solid reputation and now they have the #1 ranking to go along with it. Tobiano was a close second."
Continues Sutherland, "Where it was more of a surprise was the number of community-owned courses being counted among the Pros' favourites."
"Storey Creek earned a impressive top-ten provincial ranking, Fairview Mountain came 13th and Bowen Island, Castlegar, Golden, Revelstoke, Salmon Arm, Squamish Valley, and Sunshine Coast all got inclusion on the 'Hidden Gems' list. It just goes to show the tremendous depth of great courses that BC has to offer."
For more information contact PGA of BC Executive Director Donald Miyazaki atdonald@pgabc.org or TF 800.667.4653
blog comments powered by Disqus